This article will take a look at ten cryptocurrencies that have interesting developments lined up for the month of July, which could also have a positive effect on their price.

Ethereum is a decentralized open-source blockchain. It launched in July 2015 and employs its native currency, ETH.

Ethereum was one of the first platforms to allow for the creation of decentralized applications (dApps). Currently, there are more than one thousand dApps built on the platform. Due to its ERC-20 compatibility standard, the platform can also host other cryptocurrencies.

ETH will be subject to numerous forks in 2021. After the Berlin hard fork, which went live on April 15, the London hard fork will go live in July.

Six “Ethereum Improvement Proposals” (EIP) are likely to be implemented in the fork. Moreover, the one that has already been officially announced is EIP-1559, which could drastically reduce gas fees by completely overhauling the fee structure.

Unlike the current structure, in which users bid for gas prices, the new structure will introduce a base fee for each block. In addition to this, it will delay the “Difficulty time bomb” in order to coincide with the release of ETH 2.0.

Ethereum Classic is a hard for of Ethereum, created as a result of a disagreement between Ethereum developers. More specifically, the disagreement was about whether the effects of a hack should be reverted or not. It was launched in July 2016. The native token is ETC.

A network upgrade called “Magneto” will release on July 7. It will include a series of EIPs that were introduced in the “Berlin” upgrade.

ETC has broken out from a descending resistance line and is in the process of moving towards the $80 horizontal resistance area.

Swipe is a platform whose main aim is the connection between the fiat and cryptocurrency ecosystems. Its main products are: The Swipe debit card, the Swipe wallet and the native token, SXP.

The Swipechain testnet will release on July 6th and is a component of the Swipe network. A fork of THORChain, it enables interoperability, allowing cross-chain swaps. While it is not designed as a substitute for other existing chains such as Ethereum or BSC, it will complement cross-chain trading.

SXP has been hovering around the $1.65 horizontal support area since May 24. Technical indicators are showing some bullish signs in the form of multiple bullish divergences. The closest resistances are between $3.08-$3.62.

Kava.io is a DeFi lending platform that allows its users to lend, invest and earn. Unlike other lending platforms, KAVA provides support for cross-chain assets. In addition to this, users of the platform can stake their tokens and earn rewards directly from the platform.

The Kava Swap Incentivized Testnet will launch on July 12. It will be a testnet that will incentivize users to test its functionality. The first version of the test net will employ numerous new features, such as different Governance parameters, swap fees and rewards for delegation.

KAVA has been trading inside a descending parallel channel since April 6. It is currently right at its resistance line, making its fourth breakout attempt (red icons).

Technical indicators are bullish, supporting the possibility that it will be successful in doing so. The next closest resistance is at $7.25.

THETA is a blockchain whose main purpose is video streaming. It functions as a decentralized network, where users share computing resources. Its native token is THETA, used mostly for governance issues.

THETA aims to reward viewers with higher quality streaming service. In addition, it seeks to improve earnings for content creations. Finally, it intends to reduce costs for streaming platforms.

The Theta Mainnet 3.0 will launch on June 30. It will upgrade elite edge nodes and introduce both token staking and burning.

THETA has been decreasing alongside a descending resistance line since April 14. It broke out from the line on June 4 and returned to validate it as support on June 22 (green icon).

If successful in holding the higher low, the next resistance would be at $10.

SelfKey is an identity platform that is blockchain based. Its main product is a non-custodial wallet, providing users secure storage for their assets. Its native token is KEY.

On July 8, KEY holders will receive additional KEYFI tokens as a result of an airdrop. The airdrop will provide new tokens in proportion to their KEY holdings.

In addition, another airdrop will conduct on July 18, providing holds with one additional KEY token for each 60 tokens that they are holdings.

KEY is in the process of creating a double bottom pattern inside the $0.007 support area. If so, it could increase towards the closest resistance at $0.012.

Horizon Protocol is a DeFi platform, that aims to extend the customary DeFi capabilities (lending, borrowing and liquidity), by creating on-chain synthetic assets.

Therefore, market participants will provide stablecoins that back synthetic assets, which can be physicals assets, equity assets of even traditional financial market indices. It is a fork of Synthetix.

The Phoenix Oracle module will launch in the beginning of July alongside the Horizon Genesis Mainnet.

ZEN has been decreasing alongside a descending resistance line since May 8. After four unsuccessful attempts, it is now in the process of breaking out.

The second quarterly burn will occur on July 17. So far, the preceding quarterly token burns have amounted to roughly $50 million in value.

The native token is FET, which is a crucial part of smart contracts in the network.

The Mainnet bridge expansion will go live on July 16. It will allow for staking, with estimated annual returns of 70-75%.

FET has created a double bottom pattern inside the $0.20 support area. It has begun to move upwards, but is still following a descending resistance line.

Lendefi is a DeFi protocol that enables users to lend their assets in order to gain interest. It supports multiple assets, while offering secure lending and under collateralized loans.

The testnet will launch on June 28 while the mainnet will go live on the Binance Smart Chain on July 12.

While it initiated an upward movement in the beginning of March, LDFI/ETH has fallen back to the 0.00013 support level since May 17.

Wed Jun 30 , 2021
Inspite of the ongoing clampdowns on cryptocurrency exchanges and companies all around the environment, together with the modern ban on Binance’s regulated functions in the U.K.,the marketplace is on the increase, with 24-hour gains ranging from 3.5% to 13% for tokens in the best 10.  Bitcoin is consolidating all around […] 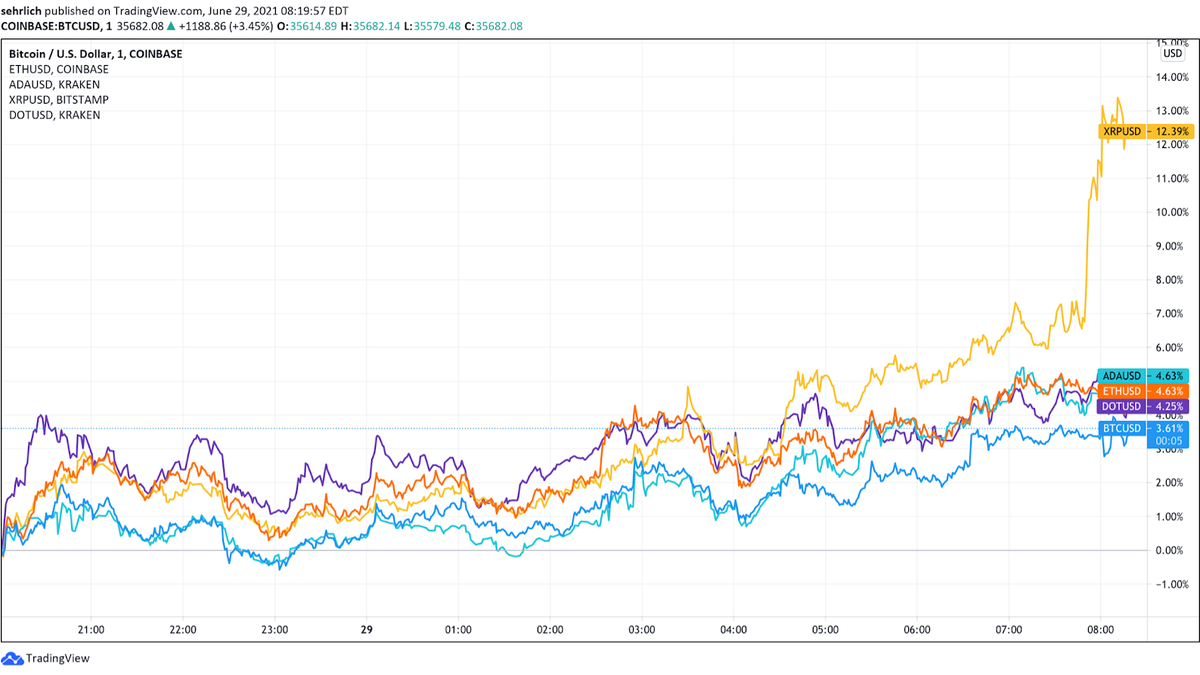