Table of Contents Helium (HNT)Verge (XVG)EthereumAave (AAVE) MediBloc (MED)Fetch.ai (FET) StackOS (STACK)Voyager (VGX)Polkadex (PDEX)TrueFi (TRU) Disclaimer This article will take a look at ten cryptocurrencies that have interesting developments lined up for the month of August, which could also have a positive effect on their price. Helium (HNT) Current Price: $12.27 Market Cap: […]

This article will take a look at ten cryptocurrencies that have interesting developments lined up for the month of August, which could also have a positive effect on their price.

Helium was launched in July 2019. The platform allows for communication between wireless devices, which use the HNT network of hotspots in order to send data to each other. Helium is closely linked and compatible with Internet of Things (IoT) devices.

HNT is the native token of the network. It has a maximum supply of 223 Million and is distributed to owners of hotspots. In addition, it is earned through the validation of wireless coverage and transferring data using these same hotspots. Finally, participants can either purchase or build their own hotspots.

In order to arrive at the maximum supply of 223 Million, HNT will begin its two-year halving schedule on Aug. 1.

Since the beginning of April, HNT has bounced five times above the $10.20 horizontal support area (green icons). Technical indicators are neutral, leaning on bullish. There is resistance at $14.05.

Verge is a privacy cryptocurrency that aims to offer a decentralized payment network that is an upgrade to the native BTC blockchain. It has numerous features related to privacy, including but not limited to: the integration of Tor in its wallet and the allowance of transactions with stealth addresses.

Similarly to HNT, XVG will also undergo a halving in August. The most recent halving transpired on Jan. 26, in which the block rewards were cut from 200 to 100.

The next halving is expected to transpire on Aug. 22, once block 5,200,000 is mined. It will reduce the block rewards in half to 50 coins per block.

After reaching a low of $0.0159 on July 20 and creating a double bottom pattern, XVG managed to break out from a descending resistance line.

It is currently increasing towards the $0.033 resistance area.

Ethereum launched in 2015 as a decentralized open-source blockchain. Its native currency is ETH.

It was one of the original platforms that allowed developers to create decentralized applications (dApps). So far, the platform is home to at least one thousand such applications.

The fork will implement a new structure in order to reduce gas fees and delay the “Difficulty time bomb” until the time when ETH 2.0 is released.

ETH is currently trading inside an ascending parallel channel. It is making an attempt at moving above the resistance lien of the pattern. Successfully doing so would lead to an upward movement towards $2,850. Technical indicators in the daily time-frame are bullish.

Aave is a decentralized protocol that allows participants to become either depositors or borrowers. The native token is AAVE, which is mainly used for voting rights on protocol improvements.

Depositors earn income for providing liquidity, while borrowers can borrow assets through features such as the flash loan.

The smart contract summit will take place on Aug. 5 through Aug. 7. It is expected to be the biggest smart contract event of the year. In it, the CEO & Founder of Aave, Stani Kulechov will be one of the main speakers.

On June 30, AAVE broke out from a descending resistance line and validated it as support after two days.

It is currently trying to break out from the $310 resistance area. The same area has intermittently acted as support and resistance since the beginning of February.

Its reclaim could trigger a sharp upward movement.

MediBloc is an open source protocol that aims to be used as a ”decentralized healthcare information system”. Through blockchain technology, it aims to record and keep track of the medical history of a patient.

The native currency is MED, which uses a reward system in order to facilitate content sharing.

Similarly to STACK, the mainnet upgrade will launch in August. In addition to bug fixes, it will update smart contract capabilities and communication with other blockchains.

MED has been increasing since June 23 and created a higher low on July 20. It is currently attempting to move above the $0.055 resistance area. This area acted as support until June 9 and then turned to resistance afterwards.

Technical indicators are bullish. A reclaim of the line could trigger and upward movement towards $0.093.

Fetch.aI is a blockchain platform built on a sharded ledger. It makes use of artificial intelligence solutions while also deploying machine learning.

The native token is FET. It is paramount for the use of smart contracts, and is required in order to create and train independent economic agents.

Similarly to HNT, FET is extremely compatible with IoT devices.

After bouncing at the $0.195 support area, FET broke out from a descending resistance line. it is currently attempting to move above the 0.382 Fib retracement resistance area at $0.363. Doing so could trigger an upward movement towards the next resistance at $0.49.

StackOS is an open protocol that allows users to offer a decentralized cloud by sharing their computing resources.  They receive STACK tokens in return for this service. Any type of decentralized or full-stack application can be deployed in the cloud.

Compared to other cloud services such as Google Cloud or Amazon AWS, StackOS is cheaper, allows for the deployment of an application in mere minutes and is anonymous.

The mainnet of StackOS will launch on Aug. 16, and will have governance and marketing updates.

STACK has been moving upwards since June 22. It created a higher low on July 20.

Currently, it is in the process of validating the $1.05 horizontal area as support. The closest resistance is at $1.38.

Voyager is a cryptocurrency platform for brokerage that was launched in Oct. 2018. Currently, it supports more than 60 crypto assets.

The native token is VGX. Its main function is to provide different rewards to its users. In addition to this, it can also generate interest if it is held in the Voyager application. The application offers transactions that are completely commission free.

The VGX token swap will start in the week of Aug. 9.  The swap will occur automatically for all users that hold VGX in the Voyager platform.

VGX is in the process of creating a triple bottom inside the 0.0008 ETH support area. There are no bullish reversal signs present.

Polkadex is a peer-to-peer trading platform. It aims to merge the benefits from both decentralized and centralized exchanges.

While it is a decentralized exchange itself, it has fixed issues such as high transaction fees, arbitrage and price slippage. It is built on Substrate and is mainly aimed for the decentralized finance (DeFi) ecosystem.

Numerous interesting events will take place in August, such as:

PDEX reached a low of $5.25 on July 20 and has been moving upwards since. While it has broken from a descending resistance line, it has yet to reclaim any important horizontal resistance levels, such as the $11 area.

TrueFi is a DeFi protocol that creates liquidity pools with high annual returns. The native token is TRU, which gives its owners the ability to provide credit ratings for third party liquidity providers.

Phase four of the 2021 roadmap will launch in August. It will:

TRU reached an all-time low price of $0.114 on July 20. It has been moving upwards since and has broken out from a descending resistance line.

However, there is no bullish structure in place yet.

Sun Aug 1 , 2021
Team USA faces the Netherlands in the Tokyo 2020 Olympics women’s soccer quarterfinals on Friday, July 30 (7/30/2021). The game will be broadcast on NBCSN and Telemundo at 7:00 a.m. ET, and can be streamed live on fuboTV, Sling and other live TV streaming services. The USWNT’s journey through the […] 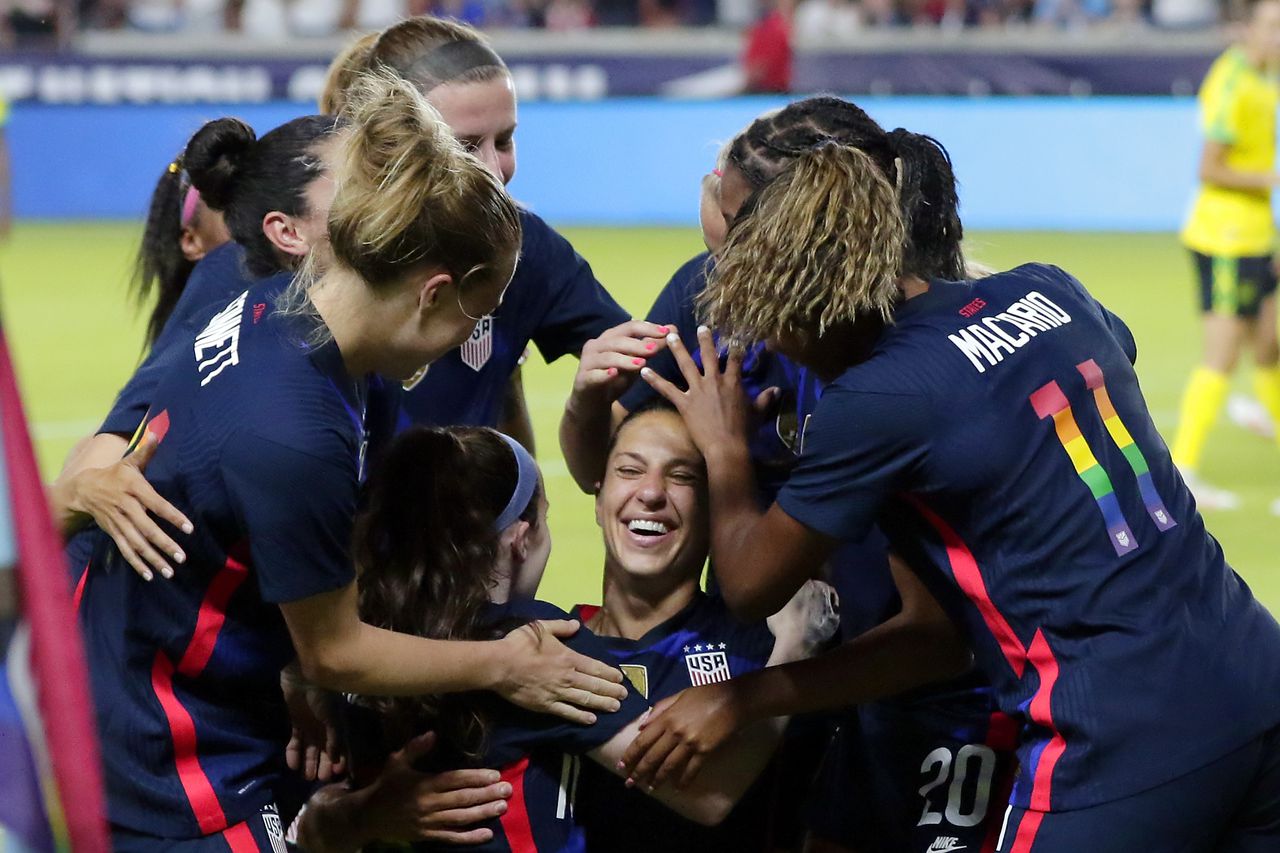